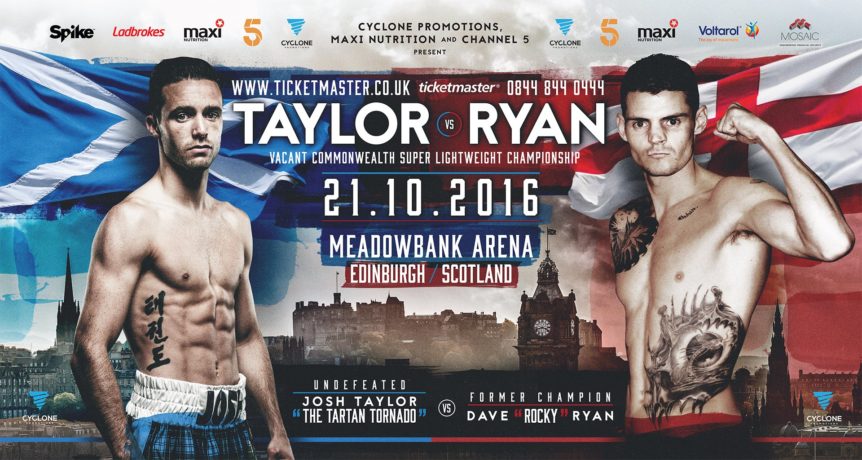 A night of championship boxing at Meadowbank Arena with Scottish star Josh Taylor taking on Dave Ryan for the vacant Commonwealth super-lightweight title .

An air of expectation is guaranteed at Meadowbank Arena this evening as Josh Taylor bids for his first title since turning professional.  A graduate from the ‘Class of Glasgow 2014’ – leaving with a Commonwealth Games gold medal – Edinburgh’s Josh Taylor not put a foot wrong since turning pro with Cyclone Promotions, winning all six of his bouts by knockout.

‘The Tartan Tornado’ has learnt fast under the tutelage of his manager and International Boxing Hall of Famer Barry McGuigan, and McGuigan’s son Shane who in July this year masterminded Irishman Carl Frampton’s stunning victory over the Leo Santa Cruz for the WBA featherweight title.  Training and impressing in such company as the aforementioned Frampton and and former world heavyweight champion David Haye, and tipped by Scottish boxing legend Ken Buchanan as a future world champion, there’s plenty of pressure on  Taylor’s shoulders tonight as he faces his toughest examination yet against the former champion from Derby, Dave ‘Rocky’ Ryan.

Tickets on the night at subject to availability.  Checking the Cyclone Promotions Twitter feed before travelling is advised.

Tickets in advance available via the 'Get Tickets' link.

Tickets on the night subject to availability. Check the Cyclone Promotions website for confirmation of availability before travelling.