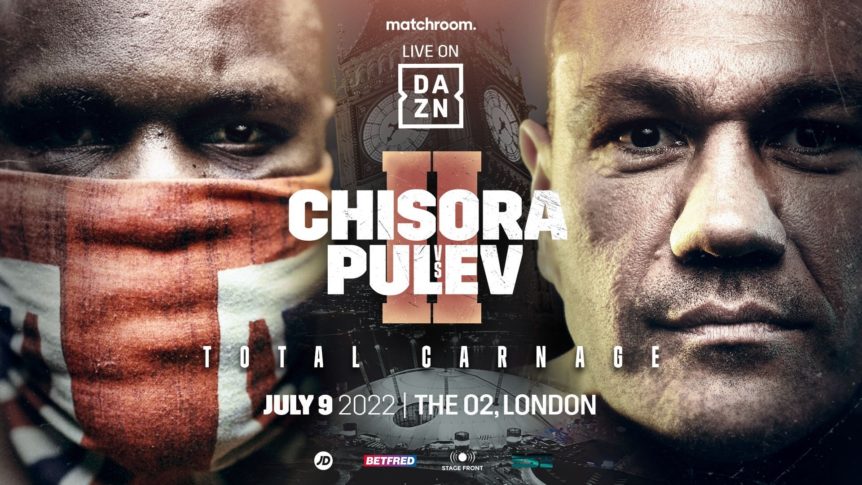 🥊 Matchroom Boxing host their latest 2022 show with a heavyweight rematch between Derek Chisora and Kubrat Pulev topping the bill at The O2.  See below for the latest ticket information.

NEWSFLASH: Congratulations to Derek Chisora who defeated Kubrat Pulev by split decision in their top of the table showdown at the latest Matchroom Boxing show in London.

Interested in tickets for the next Matchroom Boxing show in the capital?  Email tickets@sportonspec.co.uk with ‘Matchroom Promotions London‘ in the subject box and we’ll tip you off as soon as they go on sale.  And in the meantime … 👇

Derek Chisora and Kubrat Pulev will lock horns for a second time tonight, over six years on from their 12-round battle for the European heavyweight title at the Barclaycard Arena in Hamburg, Germany.

It was Bulgarian star Pulev (29-2, 14 KOs) who came out on top on that occasion, winning a tough split decision that saw him progress in their IBF world title eliminator and claim the vacant European crown for the second time in his career.

“I’m delighted to get this fight over the line,” said Matchroom Sport Chairman Eddie Hearn.  “Initially we worked on some other opponents for Derek, but this fight came out of nowhere a few days ago and I absolutely love it!  I think the strapline, ‘Total Carnage’, is absolutely perfect for this fight, in terms of the build-up and in terms of the fight itself.  Expect the unexpected but expect a thriller at The O2 on July 9.  Both men have been longstanding fixtures of the world heavyweight division and it’s all or nothing at The O2 for both, as defeat could lead to the end of the road.  Fans can expect a huge undercard and a brilliant main event.”

News of the undercard will appear hear as soon as announced.

Tickets for this Matchroom Boxing show are on currently off-sale.

Travel tips: Getting to The O2 via tube is recommended.  North Greenwich station is right on the doorstep and on the Jubilee Line in Zones 2 and 3.  Get there from Central London in 20 minutes, or Stratford in 10 minutes.  Arrival by river, car, bus and cable car is also available.  See this ‘Getting to The O2‘ guide for full details.